I participated in ‘Spark AR day -Southeast Asia‘ held at Facebook APAC office in Singapore on the afternoon of March 28th. Last time, I reported the beginning of the event. This time, I’ll continue to report this event. (The link of the previous report of this event is following.)

Last time, I introduced about 【1. Features of Spark AR】, this time from 2.

The next speaker was Engene Soh, an art director at Dude Studios. It seems that only he is not belonging to Facebook in the speakers. As an example of AR business, he introduced the work of AR (including VR) that he did in Dude Studios. (He had never mentioned, but maybe I think he didn’t use Spark AR. So just AR example.)

Firstly, he introduced art works of AR. When you look at the art works through the camera of the smartphone, they change to 3D and start to move. He had exhibited in many Asian countries.

A mini game collaborating an event using the event character. 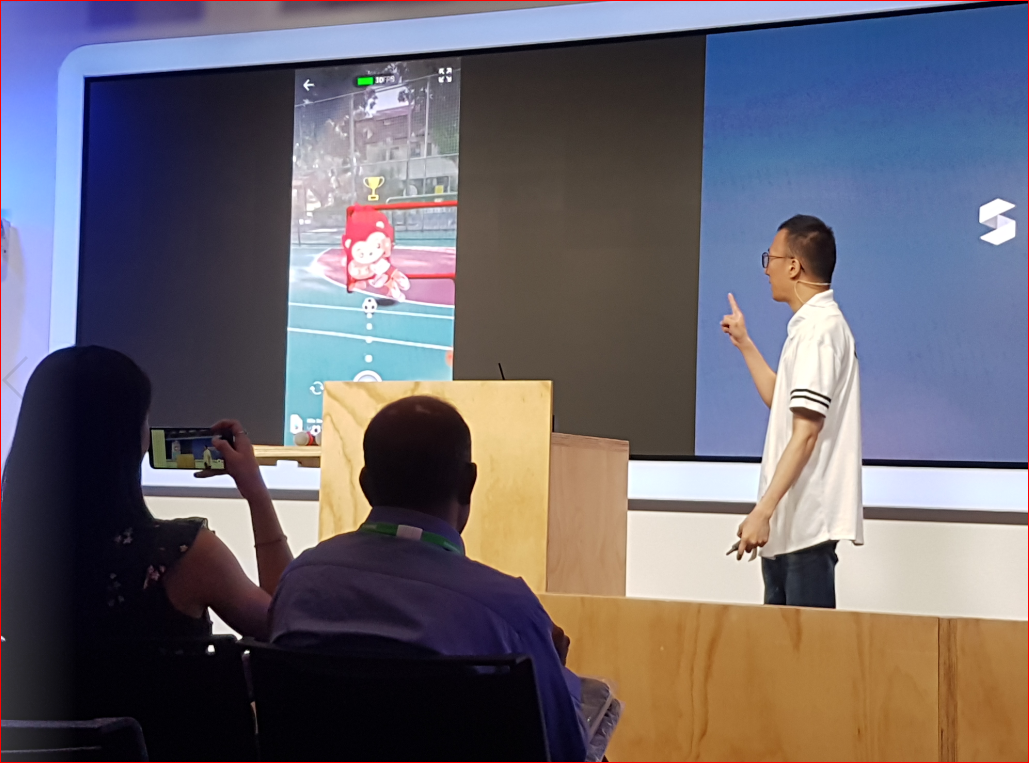 When you see a sculptural art work through smartphone, it recognizes objects and other art works appear. It seems that Mr. Lee Shenlong, the current Prime Minister of Singapore, also tried. 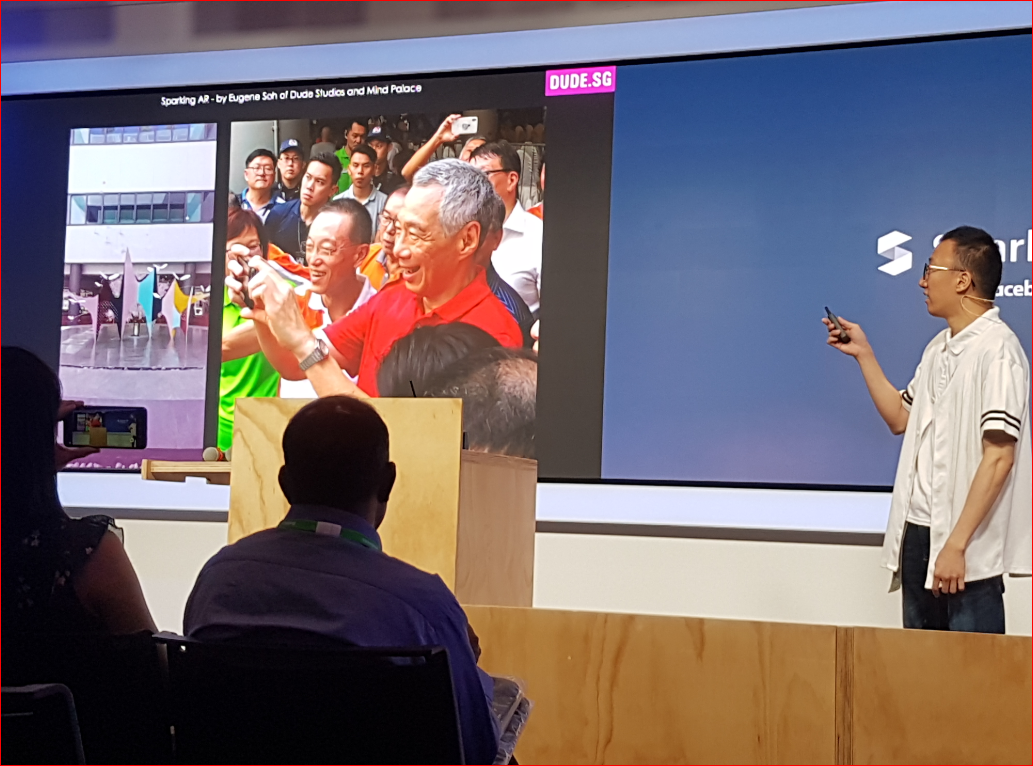 This is an example of VR used for welfare. To prevent dementia and depression in the elderly people with physical disabilities, it is better to have a new experience by VR. 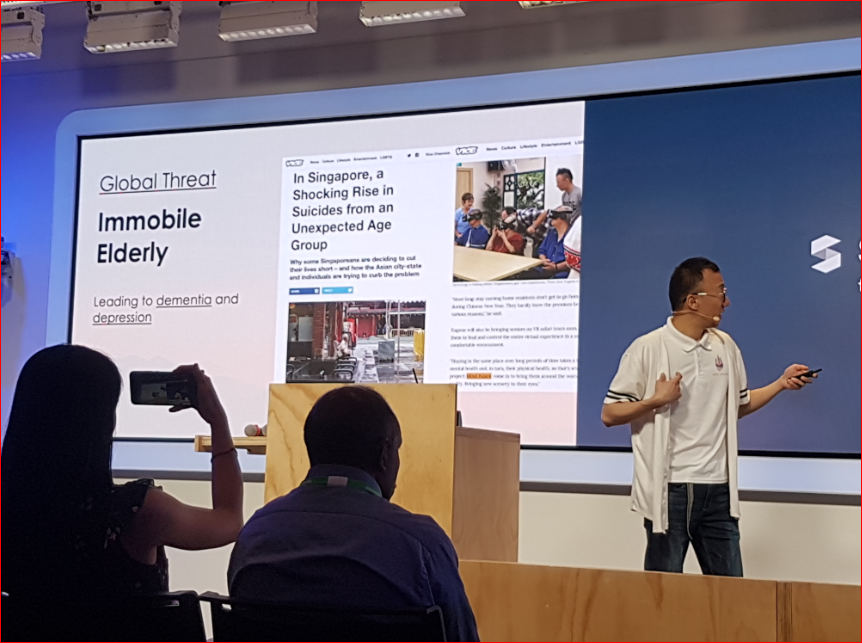 【3. How to build a brand using Spark AR】

Next speaker is Emmanual Lusinchl, the Facebook Manager and Partner Engineer. He introduced how to build a brand using Spark AR.

First of all, he analyzed users of Facebook and Instagram which is the platform to run Spark AR.

Instagram: They want to connect with people they’re focusing on and participate in culture and latest trend. They want to show themselves well and gain trust. 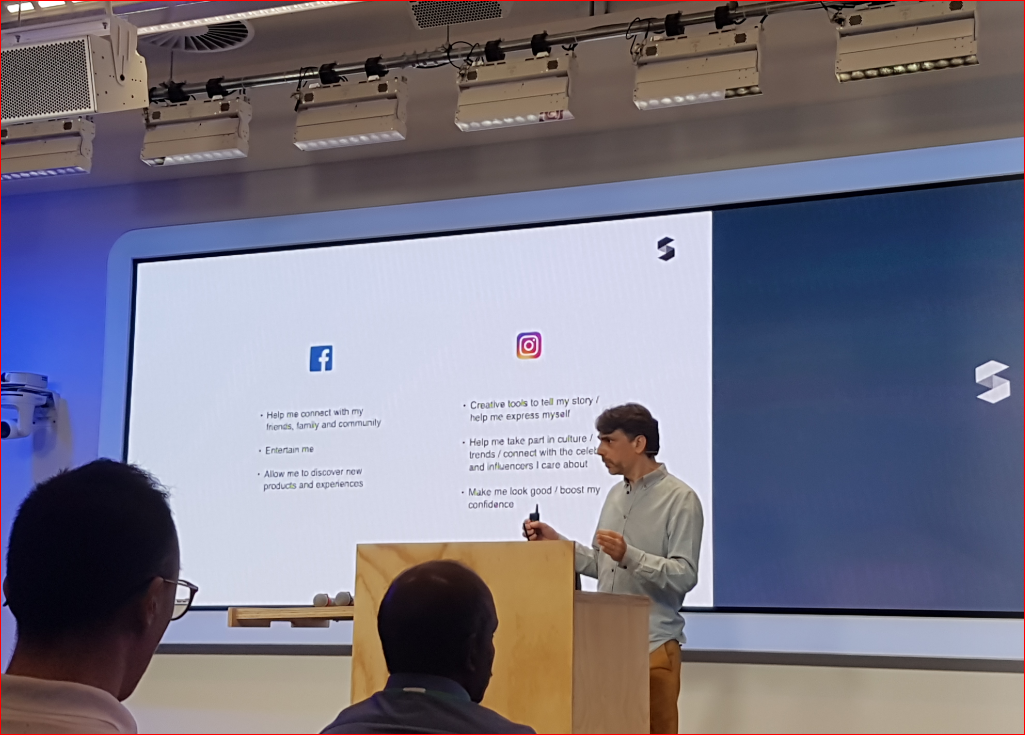 Then for these users, they can provide AR services to evolve their communication and shopping.

Also AR Ads. This has the advantages that consumers can experience the product and enjoy and share the experiences with their friends, and at the same time, advertisers can benefit greatly from both by raising the Conversion Rate and lowering the rate of returns. 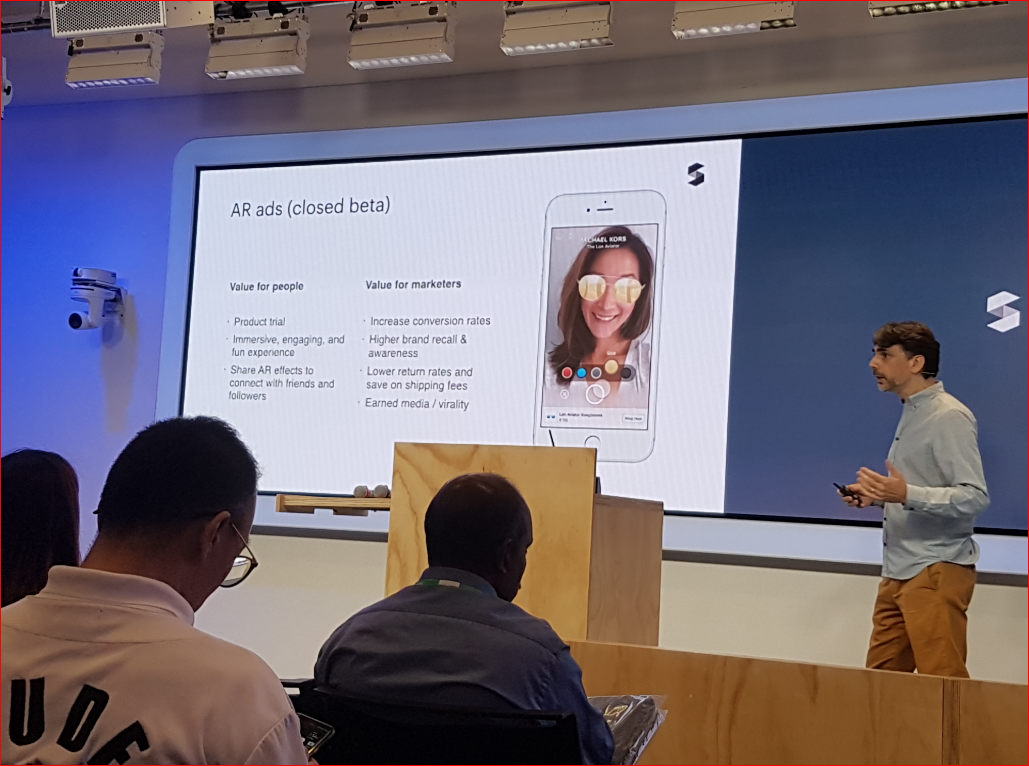 And he introduced some examples. First, I forgot the company name, but the campaign was done by a news media. What you tell your story as a caster is automatically formed like news. 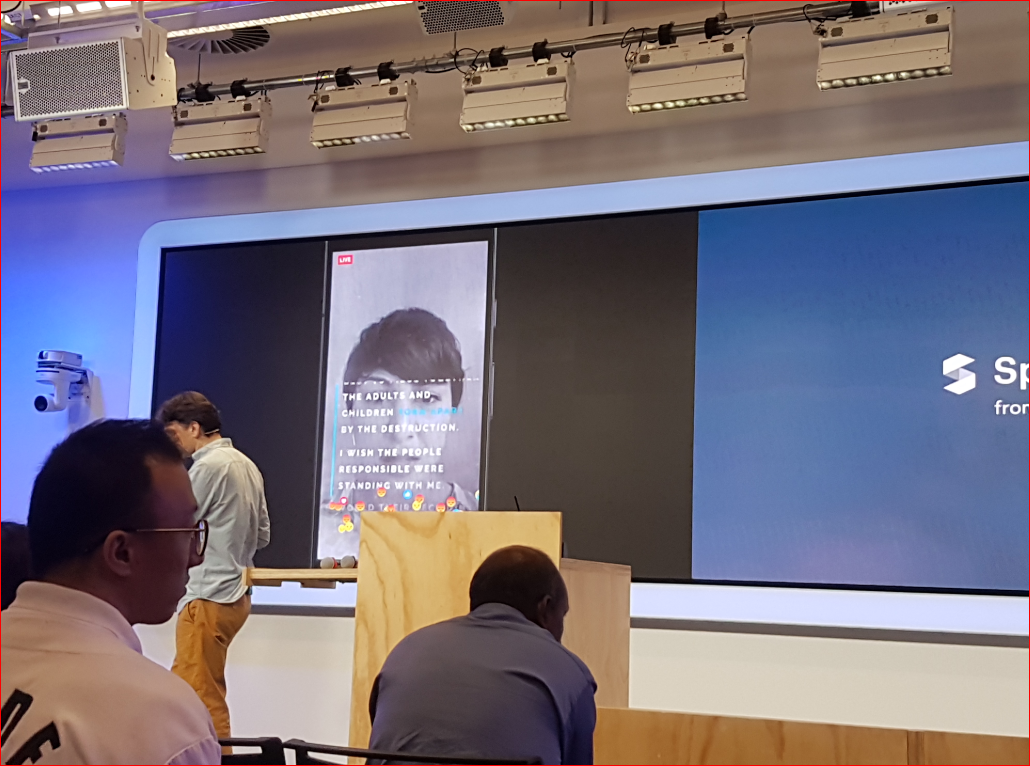 Here, customers can check how they are looked like at the video they tried to have a variety of bags. (I think it doesn’t make sense to use AR at the store …they can directly try at the store…) 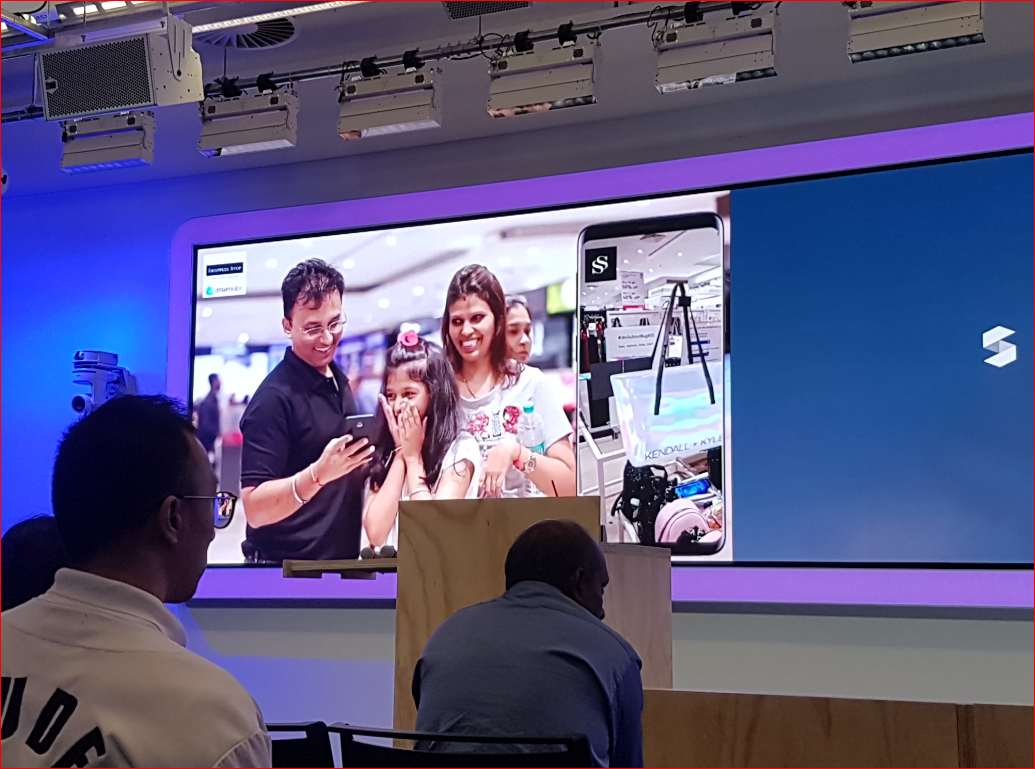 This is a promotion of LG’s new products. LG gathered many cases of failure of washing clothes, and displayed those as Museum using AR format in their stores. And it mentions that if you use new laundry, you will not encounter those kind of failure anymore. 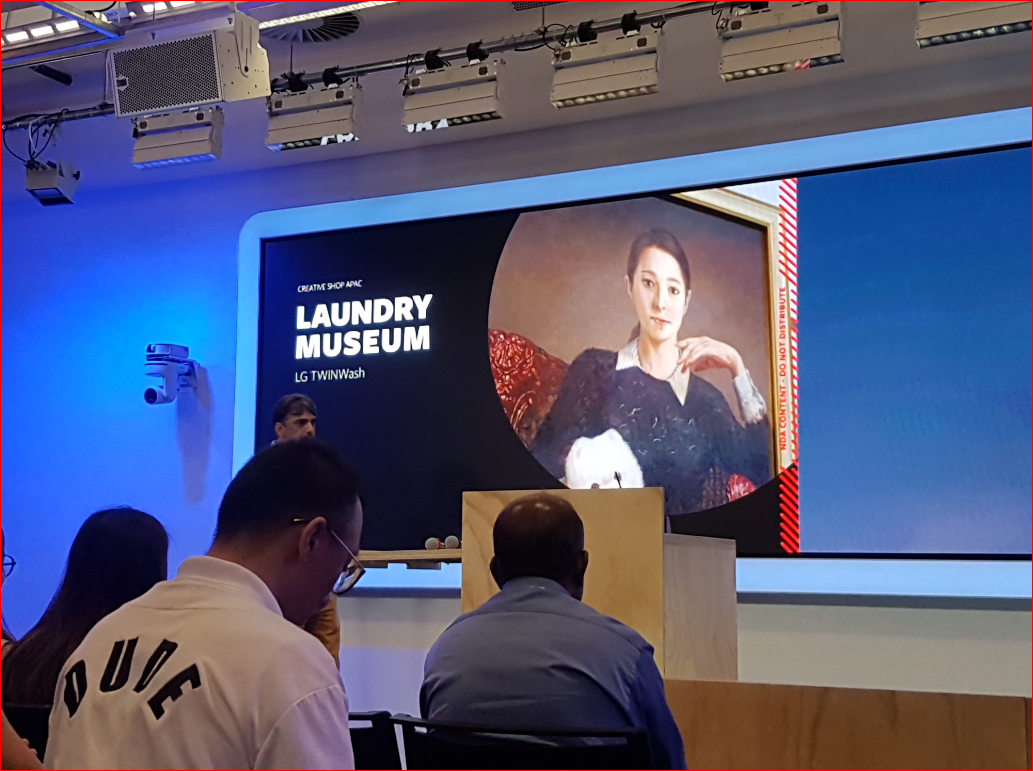 These are Promotion examples of GUCCI and DISNEY

And Mini game for Advertisements and Promotions.

About next speaker, I will introduce the contents as the last part of this reports next time.