I’ll introduce about one session held in Unite 2018 Tokyo which was started from 7 May unitl 9 May 2018 at Tokyo International Forum.
It’s about “Unity for Deep Learning: Tool kit: ML-Agents”, and the speaker was Mike Geig who is working for Unity as Head of Global Evangelism Content.
This topic is about Machine Learning, It’s very hot topic recently.

He showed some demos of ML-Agents which is used to realize an environment to do machine learning on Unity. (It’s released from Unity). And he explained about how to set up ML-Agents in detail. It’s a session of individual topic, so he explained not only just showing demos about machine learning result, but also how to set up in Unity, how to train a machine, how to use the learning results after training. Those kinds of details were explained step by step.
(You can watch the session here.)

Actually, he is not AI specialist, but he is an evangelist, so his explanation is very easily understandable.

Firstly he showed a demo about Imitation Learning which is sometimes shown at Keynote too. This example of machine learning is very understandable example.
In following screen, a car of left is controlled by human player, and right side is controlled by machine which is learning from player’s controlling. 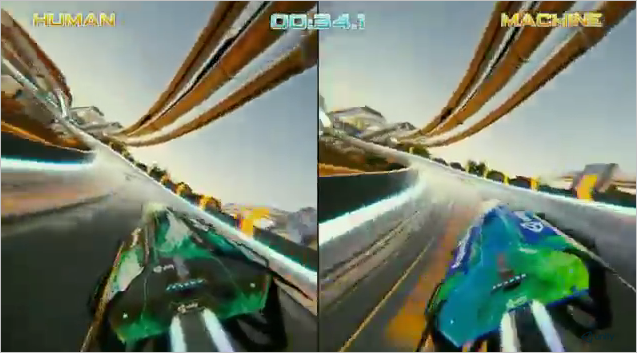 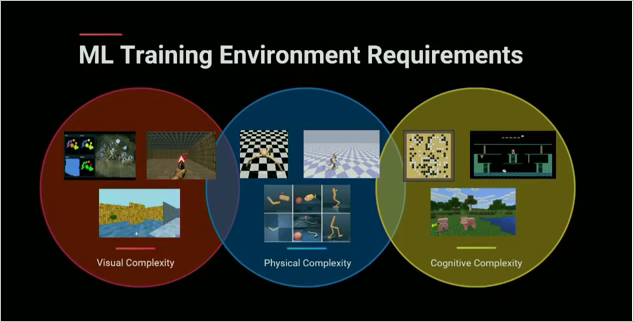 Yes, he’s correct. I totally agree with that, Unity have a high affinity with machine learning.

And he explained system structure of machine learning in Unity, especially about Agent, Brain, Academy components using following image which is used in many places, such as Unite, Unity blog, and some explanation pages about ML-Agents. 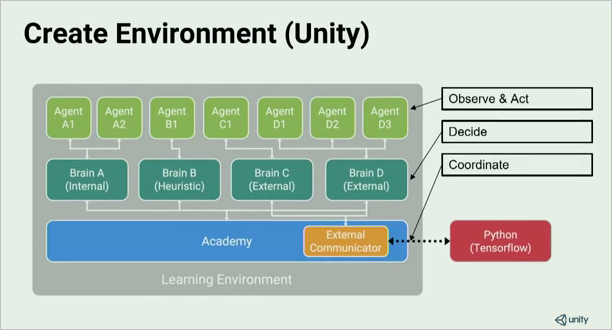 [How to set up ML-Agents]

Regarding the way to set up ML-Agents, he explained the detail of setting of the car race game used for Imitation Learning. About folder structure of ML-Agents, and important points of Project Setting. And also about how to set up Basic Academy component, Brain component, he explained in detail.

As one important point which was modified in this demo case, he talked more about ‘AgentAction’ method which was written about movement of the Agent, ‘CollectObservation’ method which is getting information around the Agent by casting Ray, and ‘AgentReset’ which is called when failed happen.

After finished demonstration for setting, he showed demo of training the machine. He controlled one car by himself, and made the machine do Imitation Learning there. And after just 30 seconds, the machine became to control the car very well.

Next he explained how to import ‘bytes’ file which is data to be trained into Unity. Then finally he showed a game which is controlled by the AI just now trained. It controlled a car very well even it’s trained for just a few minutes.

In this session, I could really understand about ML-Agents, because he explained just not only showing the last result, but also all processes of making a machine learn.