Last time, I introduced Keynote of Unite 2018 Tokyo held on 7 May 2018 at Tokyo International Forum.

This time, I’ll introduce in the middle of this keynote.

The first presenter this time is Mark Schoennagel who is Lead Evangelist. He firstly explained about Core Runtime which is become smaller and faster. (This topic was explained by Ralph Hauwert (Head of Platforms) at GDC Unity Keynote.) The new Unity Core Runtime is 72kb, it’s smaller than image file of Unity Logo. 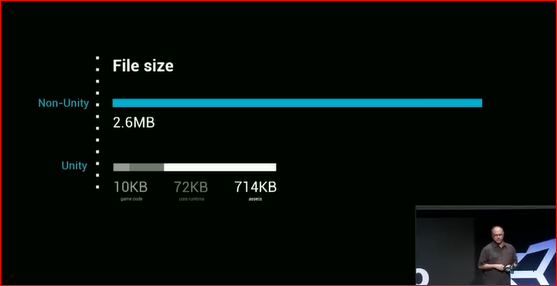 Then he introduced playable advertisement as an example to use the small Core Runtime. This time, he demonstrated race game as playable advertisement which is used ‘FASTLINE’ made by Space Ape. The file size was 800KB (if you used other game engine, it’s 2.6MB), then the load time was 1.3s (if other engine, 2.7s). 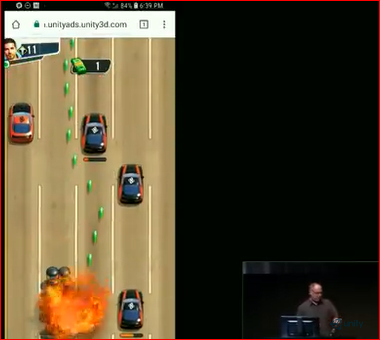 In actual demo, in just about 2 seconds, he could play the trial version of the game with sounds. After finished the playing, it induced the player to Google Play store, and user can download the game itself from there. It’s very great!!

[Some examples for other industries]

Next, Mark Schoennagel introduced that recently Unity is used in many industries which are not game industry like following image. (For me, it’s the most interesting topic in this keynote.)

As you can see, many big companies are listed. Now, Unity is used in Automotive, Architecture, Construction, Aerospace, Defense… in many kinds of industry, it’s used as especially real time rendering engine, and AR & VR engine.

Then he introduced some more specific examples of Automotive industry. Firstly Audi is using Unity for car designing in VR environment which is used a cray before, and also using Unity for training for assembly lines. 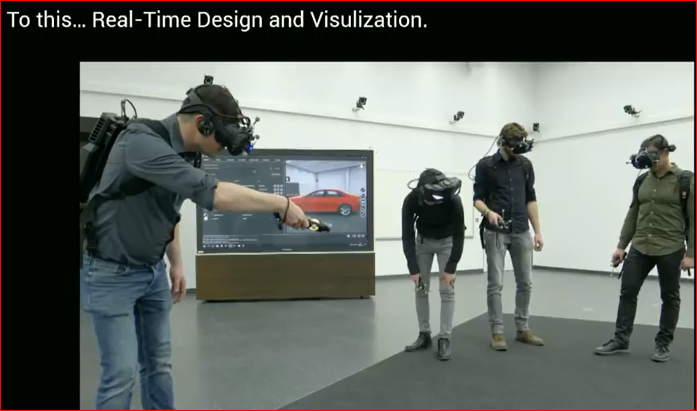 And Unity is also used for car body simulation for Lincoln, sales promotions to customers for Ford, dashboard display for concept car, and so on.

Finally from him, he announced that Unity made a contract for partnership with PiXYZ who is leading company in CAD data import industry. In his demo, CAD data of LEXUS which have 50 million polygons and 3 thousands objects were imported into Unity for only about 1 min. By this, you can easily modify CAD data using Unity editor function, and also design using VR environment. 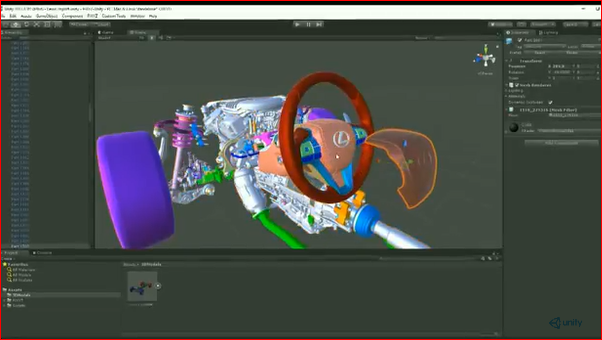 Next speaker is Jay Santos who is Technical Evangelist. He explained about technical direction to develop Unity. (It’s the topic talked in GDC Unity Keynote by Joachim Ante (Co-Founder, CTO).)

Firstly he introduced ‘500ms’ time as keyword, and he explained that they will aim to finishing within 0.5 seconds for any processes. For example, After modified C# file, then you can confirm it within 0.5 seconds. To realize this, they’ll release “Package Manager”, “Entity Component System”, “C# Job System”, “Burst Compiler”. Roughly said, those are like following.

– Package Manager: You can modify specific part without affection to others. It’ll contribute to Unity updating without errors.

– Burst Compiler: It can easily improve a performance by optimizing machine codes. You can use it by just activating.

To be continued to Part3.