This is an introduction about Keynote of Unite Los Angeles 2018 which was held in Los Angeles, USA from October 23rd to 25th October. I wrote about this topic in last 2 posts, and this time will be the last.

This article is based on Youtube video below and I also indicate the time that the next topic will start based on the video, so that you can easily watch the parts of your interest directly.

As Disney’s R & D efforts, since 2016 they have been interested in Real-Time animation and focused on incorporating it into TV business. The balance of cost, speed and quality is important for creating animation, but normally when you take one of them, another tends to be lacked. However, real-time animation can improve all three at the same time. In addition, if you create it with Real-Time, there are also merits that it can be easily converted to Games and AR / VR. 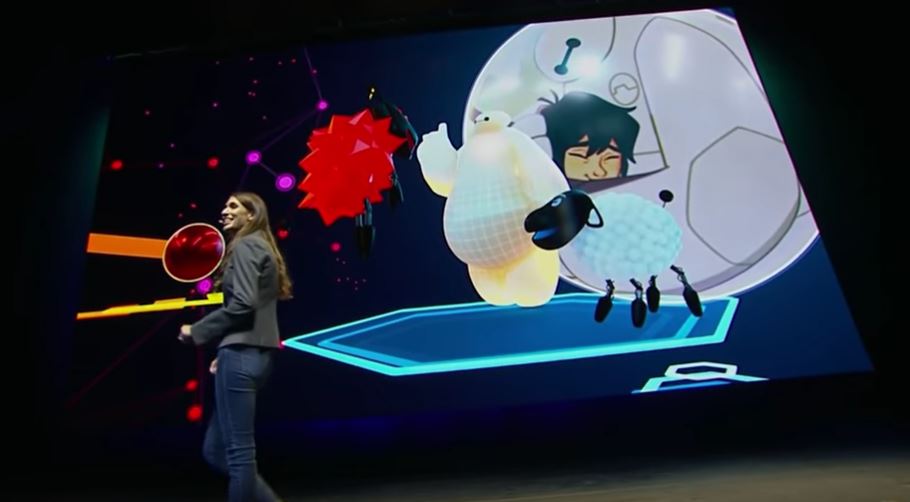 She said that this new animation program can be watched with Disney Now and Disney Chanel.

【1:18:47：Demonstration to modify the Real-Time animation】

Next, Lucas Meijer who is Technical Director at Unity and Mark Droste who worked on creating Baymax Dreams as Assistant Director appeared.
They showed a demonstration to directly modify one scene of Baymax Dreams, introduced by Disney’s Kaki Navarre just now, using Unity Editor. 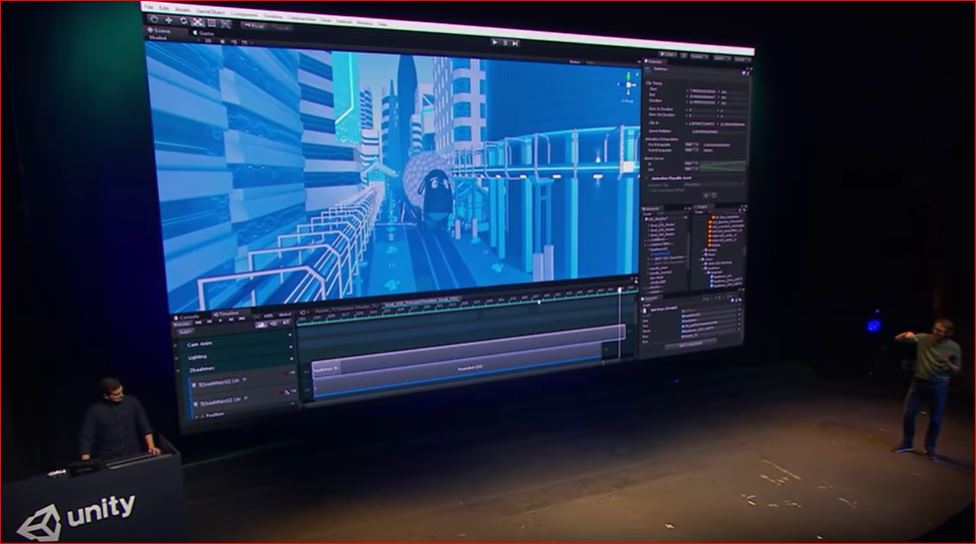 Following Lucas’s suggestion to change the original animation to Halloween style, Mark operated Unity Editor. Originally from the sky a red laser was released, but they changed the scene like falling the huge zombie sheep from the sky, and also change color, brightness, daytime scene to night scene.
Then in game mode, they tried that animation. In 5 minutes they got completely different scenes.

By the way, the conversations between these two people, the high tension of Lucas and the slowly blurred reaction of Mark were very interesting.

And at the end of this topic, Disney’s Kaki Navarre appeared again and announced. They are planning to release a game based on ‘Baymax Dreams’ from Disney Now in early next year. I think it’s natural for Real-Time animation, because no required to make assets and environments.

Next, Natalie Grant who is Sr. Product Marketing Manager, Film, appeared on the stage. She explained about Real-Time Film Making. Especially about Virtual Production that the actual actor acts in Virtual CG environment. She talked about the two big topics of ‘Virtual Cinematography’.

Firstly, about MPC Film which is Visual effects and Film production Studio. They won the 2017 Academy Award for Disney of Photorealistic movie ‘The Jungle Book’ which made by almost CG. They used Unity to create the very beautiful CG Virtual World where the actual actors act.

Next, she introduced about Digital Monarch Media who have been nominated Oscar award and won BAFTA for Visual effect. Their “Ready Player One” and “Blade Runner 2049” acquired a big hit. Of course they used Unity for them and made the Virtual World in the near future.

Here, Natalie said there is a special announcement, and all the Keynote’s speakers, including the CEO, appeared on the stage.

And CEO John Riccitiello took a microphone and announced M & A with Digital Monarch Media, Natalie talked about just now. Wes Potter of DMM and other DMM members also came on the stage and had a speech.

At the beginning of Keynote, CEO John said that Unity will also focus on some industries other than games. As one of them, he raised Film industry, therefore this M & A is one of their big efforts.

Because all of Keynote speakers came out for the announcement of M & A as if this was Keynote’s end, I think that it was hard to start, but the next is Unity Co-Founder, CTO’s Joachim Ante and Technical Art Director Martin Kummel were appeared. They explained about the technology related to performance. He said that they are aiming for 60 FPS to be stable stably for any big contents.

And a demonstration was shown. A lot of floating cars run in a beautiful Hong Kong style scenery of SF, and he was operating his own Flying Car. 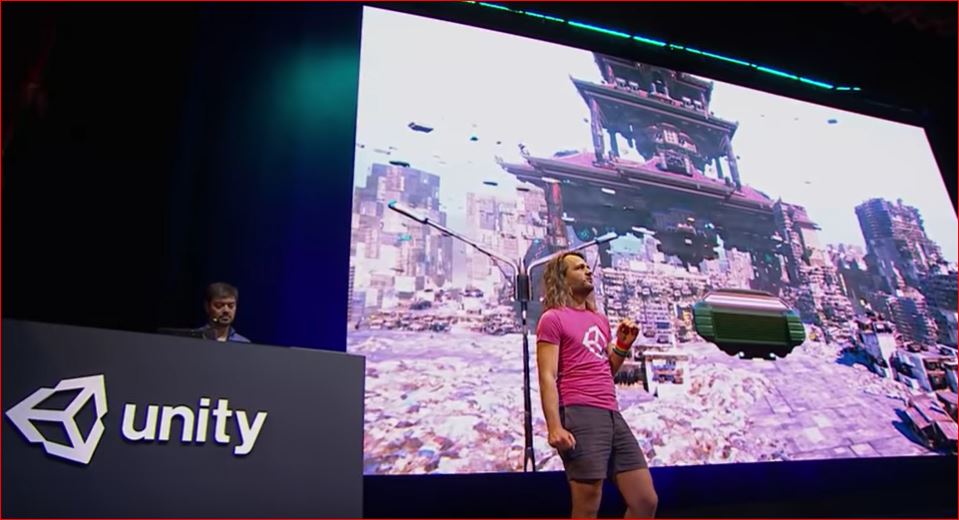 According to his explanation, 500 Flying Car with individual AI Agents were automatically driven recognizing other cars so that accidents do not occur respectively. He also mentioned they used 200,000 objects for each rising building in the scene, and they used 100,000 individual Audio Sources as well. This game scene which was definitely understood as huge content at a glance was displayed at 60 FPS.

This was realized by C # Job System, Entity Component System, Burst Compiler which are the new performance improvement functions explained in the previous Unite many times.

Finally, Joachim took out his Mobile Phone and performed a demonstration on the Mobile Phone. It also moved very smoothly even on a mobile phone. 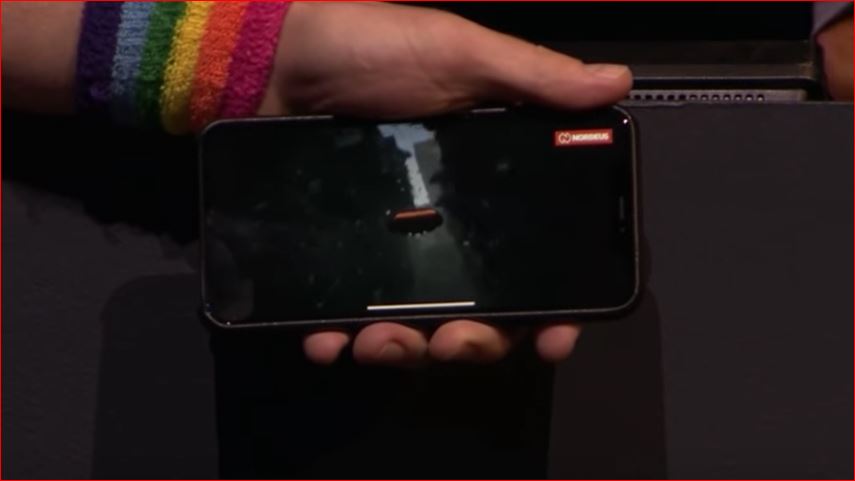 He explained that Entity Component System and Burst Compiler are also excellent for battery consumption and performance improvement.

And he announced this project demonstrated here will be released in 2019, including those assets.

After that, everyone comes out to the stage, and Timoni West of the Director of XR Research Labs gave a closing speech and it was the end.

I introduced about Keynote of Unite Los Angels 2018 in last three times. I think that I’m completely becoming Unite Keynote watcher, but if individual sessions I’m interested are also in public, I will try to introduce those as much as possible.