Currently I am developing AR application with Singaporean game designer as Lam7 ( http://lam-7.simplesite.com ) (It’s similar but different from Lab7).

This time, I will introduce you ‘Gotcha! AR‘ here. The screen is like the above image.

We will exhibit this ‘Gotcha! AR‘ at Taipei Game Show to be held at the end of this month. I have not yet completed to develop it for releasing, but I’d like to get opinions and ideas from many people.

By the way, ‘Merlion Adventure 2 AR‘ recently released and ‘Merlion Adventure for Windows‘ from Lab7 will also be displayed there. I am also thinking that I will get many opinions about those from Taiwanese game users and people related game industry.

This game ‘Gotcha! AR’ is able to play with 4 players. The four people participate as ‘Detective‘ or ‘Thief‘ or ‘Undercover Police‘ or ‘Hitman‘ role which are announced from system. (The roles of other players are secret in the beginning.) And look for items and hints to identify opponents’ role and try to catch someone. 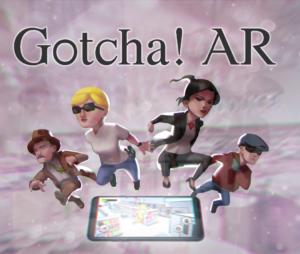 In this blog, the content of the game is enough I think, next, I’ll explain technical features as programmer.

At the timing of the Taiwan Game Show, it will be still under development, so I will continue to develop it afterwards. If I find interesting technical things through this development, I will introduce it in this blog.