This time, I will report on ‘Unity AR Foundation‘ course hosted by Unity Singapore on April 23.

The instructor is Marek Marchlewicz, Technical Evangelist in Unity Singapore. (In the course of Vuforia, he was the lecturer too.)

Unity AR Foundation is Unity’s AR framework that supports both Android and iOS. Because releasing to both devices will be become very easy, I’ve been considerably interested since it’s announced in Unite before.

(Then when I’m writing this report, this is a Preview version.)

In this course, ARCore and ARKit were introduced as AR frameworks, and he explained what AR Foundation is like, and finally practiced actually creating AR in AR Foundation.

In this blog, I will report the explanation part about AR Foundation this time.
And, the training part will be introduced in the ‘How To’ format next time as ‘How to set up Unity AR Foundation’. 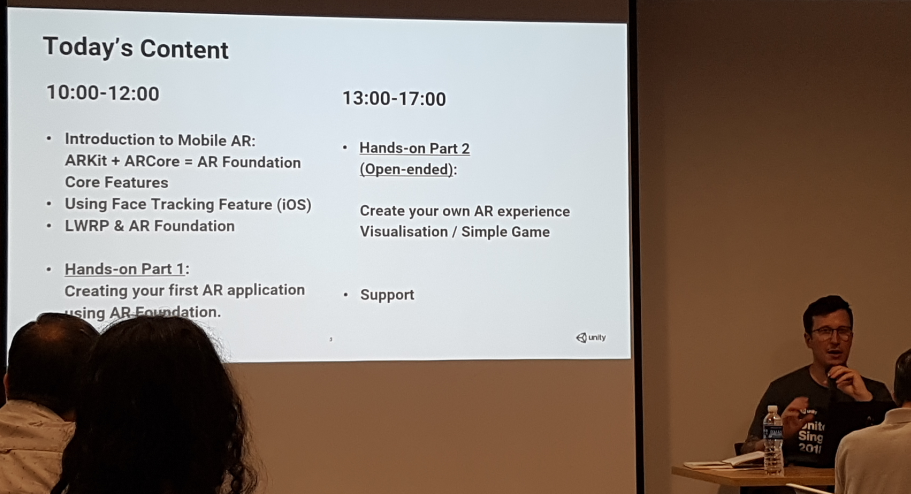 [About AR Kit and AR Core]

There was a basic introduction about ARKit and ARCore firstly. Regarding this, it was not main topic of this session, he introduced just overview there.

First of all, as you know, ARKit is an AR framework for iOS. Currently, ARKit2 is being released. (When the session was held. Already it’s released more new version now.)

The followings were mentioned as the features of ARKit.

– Object Detection: To recognize real shape’s objects instead of planes. 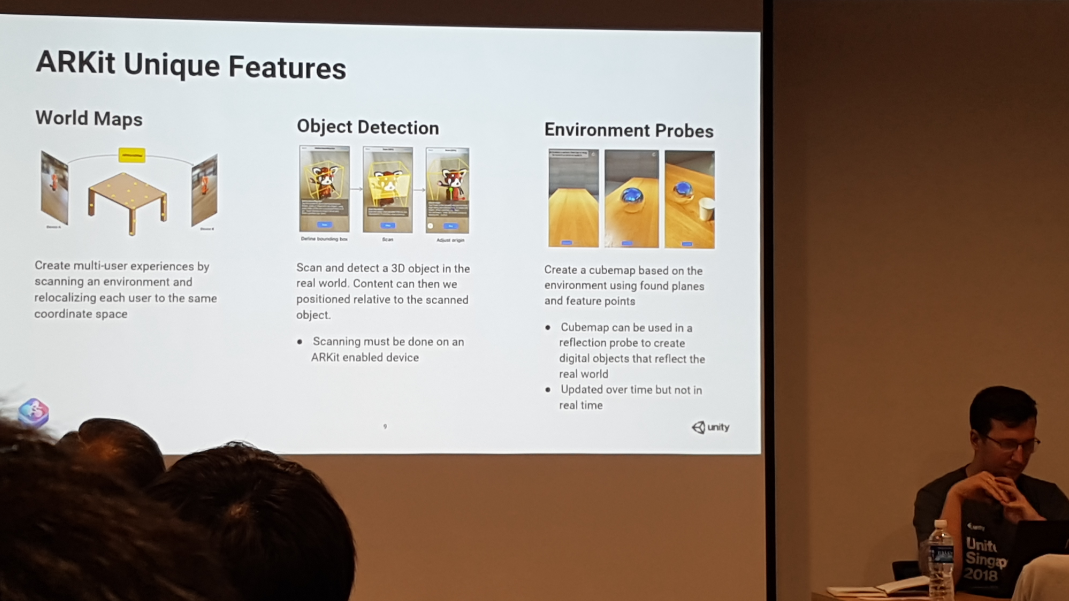 Next, about ARCore. I’m also mainly using ARCore. It is AR framework for Android and the current version is 1.8. (When the session was held. Already it’s released more new version now.)

The followings were mentioned as the major features of ARCore.

– Oriented Feature Points: To detect surfaces that not only on horizontal and vertical planes but also in various directions.

– Face Tracking: To recognize face in three dimensions by camera base without depth sensor. 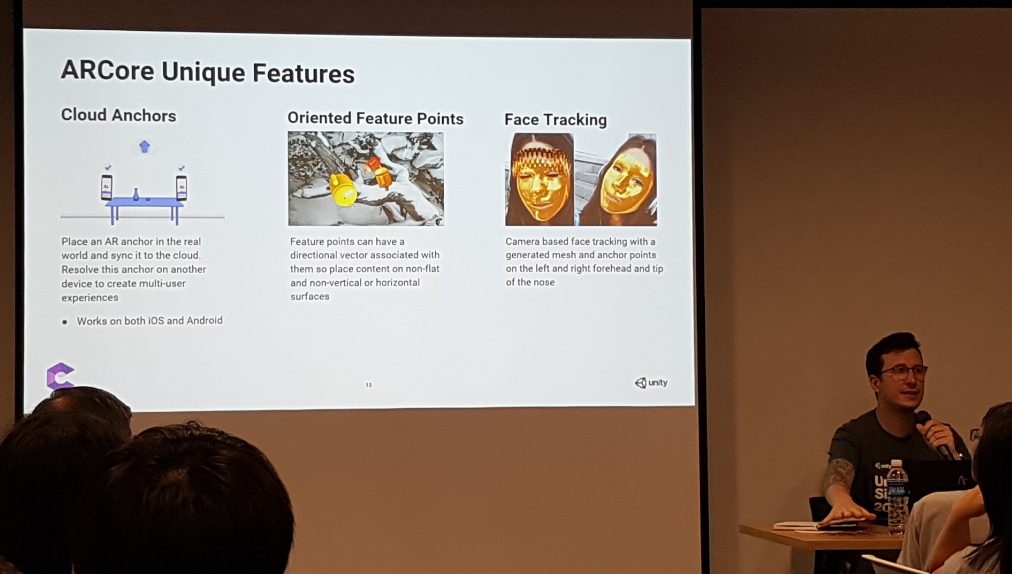 Here’s a explanation of Unity AR Foundation, an AR framework provided by Unity. Because it is the main story of this session, I will introduce all the slides used there. 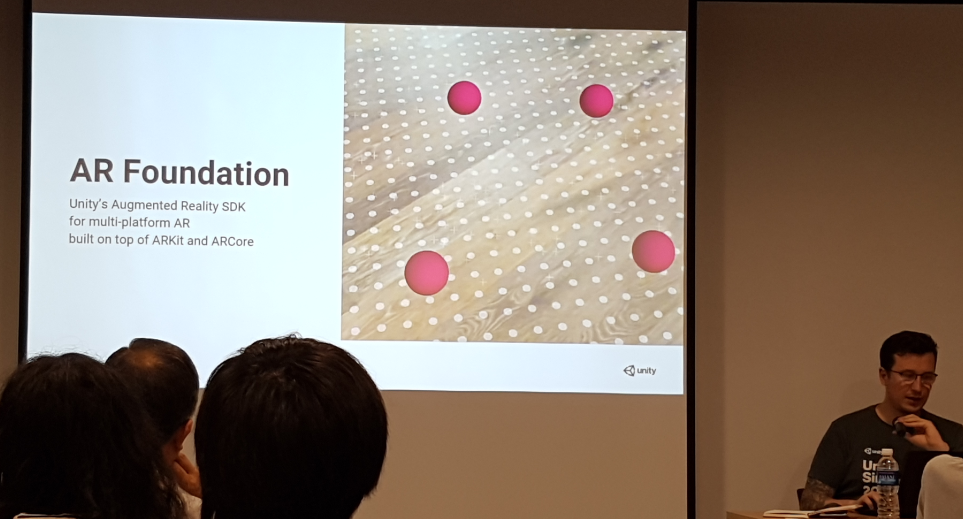 It can be used by importing from Unity’s Package Manager. At the timing of this course, it is still a preview version (Preview22 of version 1.0.0).

The structure of AR Foundation is as shown in the following slide.

The point is that AR Foundation exists on ARCore and ARKit, and developers can create applications for each platform by Unity. And at build time, it will be built using ARCore or ARKit.
Therefore, although some bloggers sometimes described that ARCore and ARKit do not need to be imported if AR Foundation is used, it’s not correct. The importing ARCore or ARKit plugin is necessary.

Apart from the fact that it is compatible with Android and iOS devices, other features of AR Foundation include followings:

「Remoting」
You can test AR function by connecting to the device directly from Unity editor without building for mobile devices. 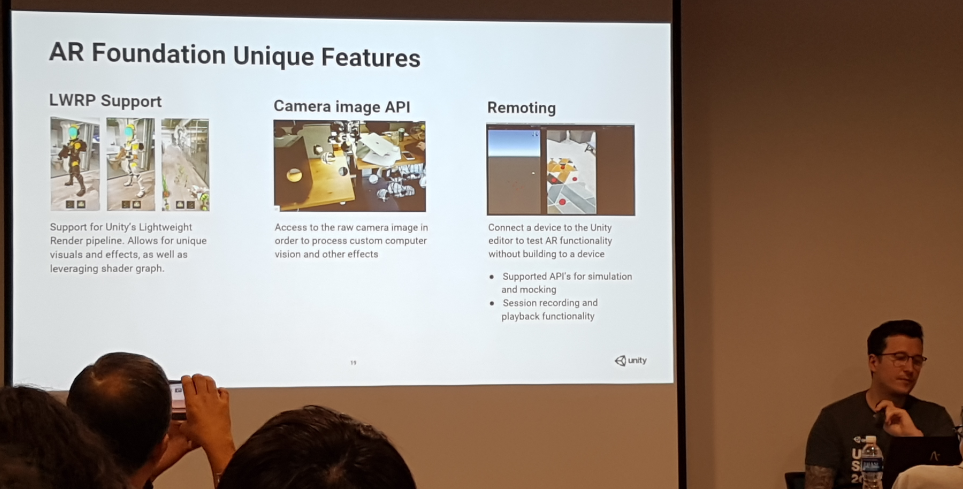 Next, regarding the functional details that can actually be realized by AR Foundation.
Look at the following slide to see which features are available in AR Foundation. There are functions with ‘In preview’ and ‘Coming Soon’ .

And here’s a big note. From this chart, looks like AR Foundation is the strongest with both ARCore’s features and ARKit’s features! However, it’s not correct. 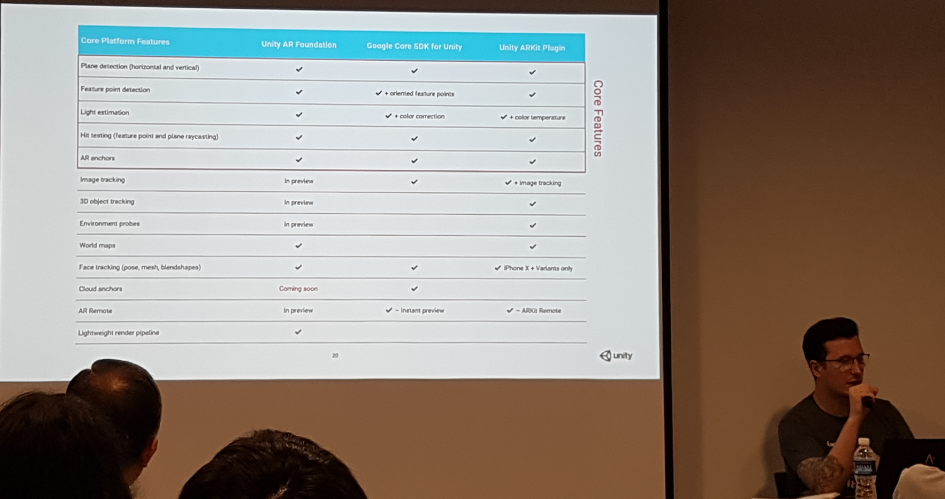 【 How to set up Unity AR Foundation 】