On the morning of March 28, there was AR course called ‘Unity Augmented Reality (AR) with Vuforia‘ at Pixel Building in One North, where many Tech startups in Singapore gather. This time I will report on the course.

(For that reason, I will skip the explanation like ‘Feature of Vuforia’ and ‘Setting of Vuforia’ which are common information on the net in this blog.)

The instructor is Marek Marchlewicz, Unity’s Evangelist. He responded politely to all the questions on the spot. And later I asked him about a detailed part of the course content in Mail, and he gave me a very detailed reply on the same day. He is very polite nice guy. 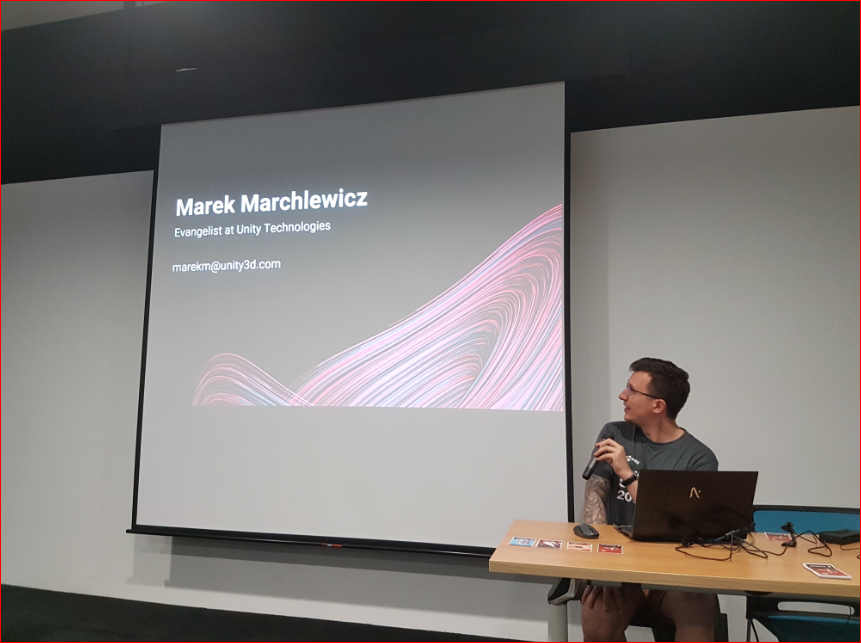 He explained from the outline of AR itself to the features of Vuforia. For example, about some targets which are recognizable by Vuforia. (Basically, those are information that I have seen on the net.) 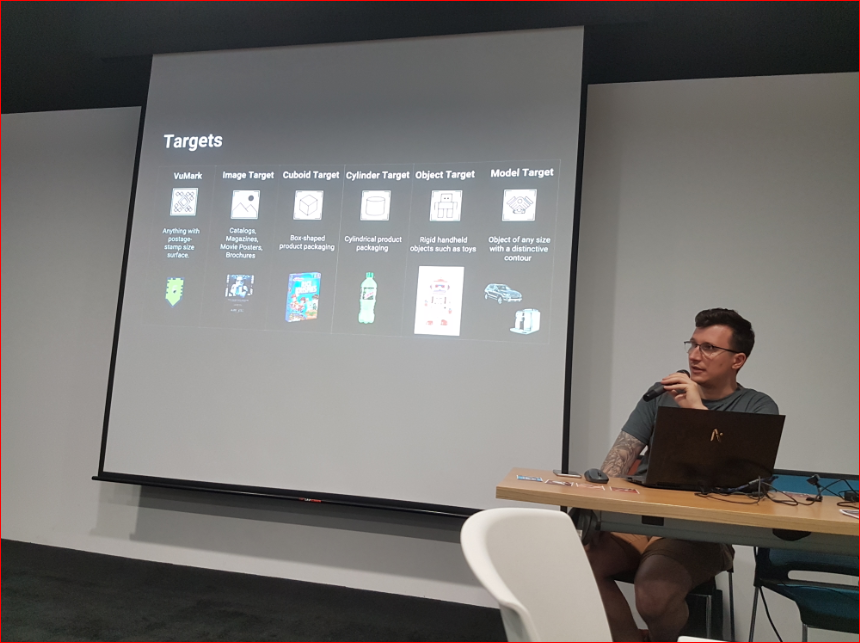 【How to set Vuforia】

A brief description of creating a simple AR was given, using Vuforia to recognize markers and issue 3D models on Unity.

They asked us to bring a laptop with the latest version of Unity, so I thought there is an exercise here, but it’s just ended up with explaining the slides.
(When I actually try it, I will write an article in this blog about how to set the details again.)

【How to improve the tracking】

Here, about how to improve the recognition rate of the marker image that I wanted to hear the most.
(There were also information that I had never seen on the net, so here I will explain in detail using all the slides he introduced.)

First, with regard to ‘Image Recognition Rate‘ expressed as ‘%’ in ARCore that I use mainly. In Vuforia, it is expressed by the number of stars, and five stars are the highest value.
ARCore’s Augmented Images require over 75% for the rate. In Vuforia, 4 or 5 stars are required. 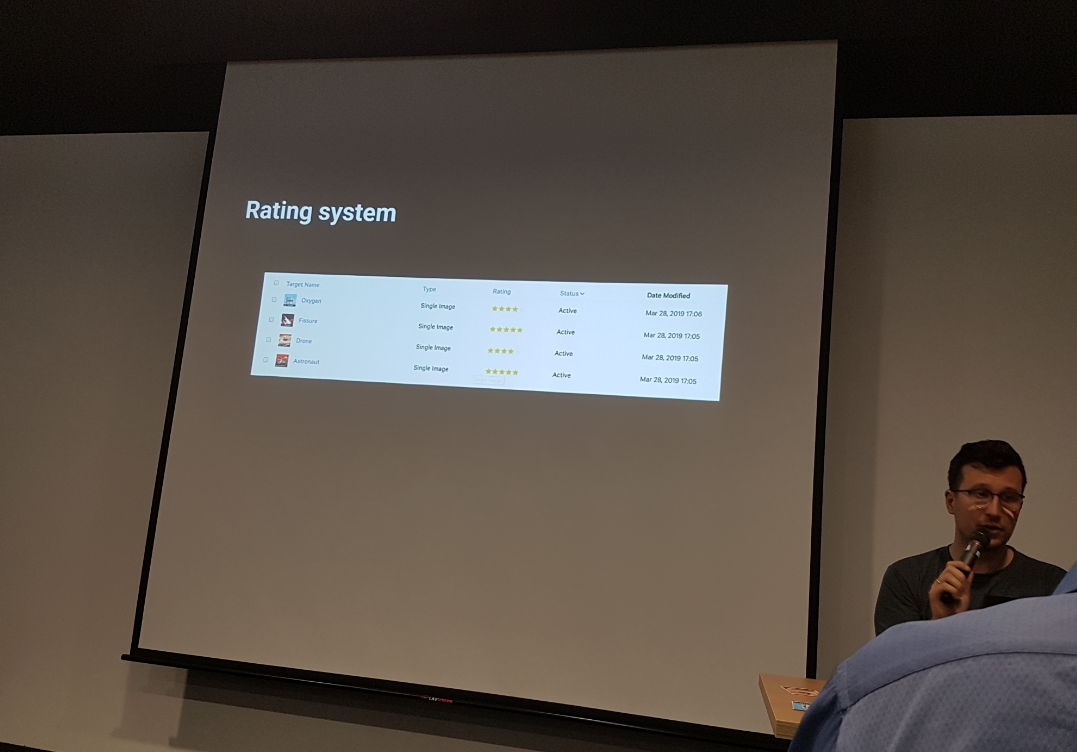 And he explained the ideal image for image recognition.
・ Even fine parts should be clear.
・ There should be enough parts with high contrast.
・ The same appearance is not continuous. 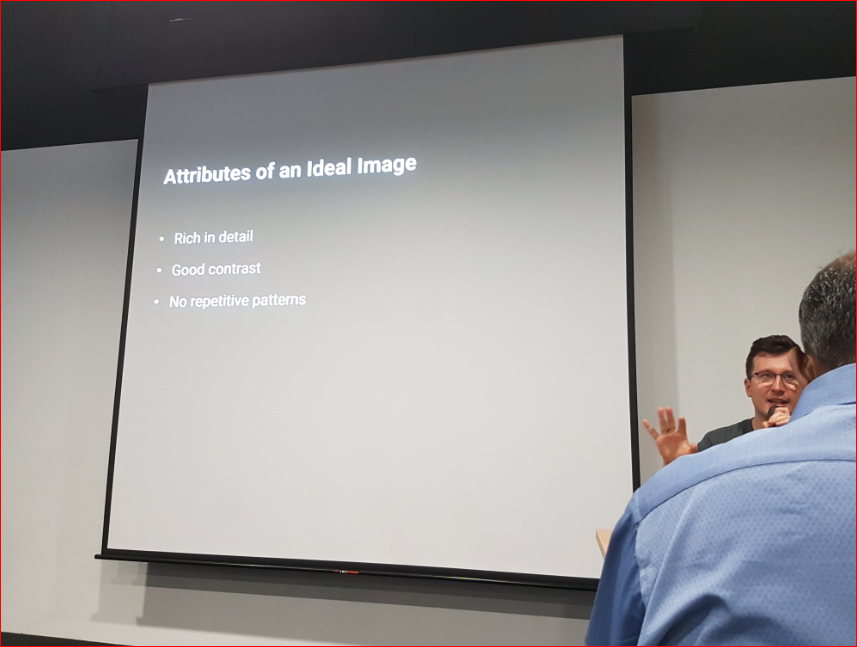 These are same with ARCore, but in this session he explained these details more.

First of all, it is important to have many features (feature points) for Marker Image Recognition. Features are characteristic points to recognize the image, such as Corner and Sharp Edge.

The yellow dots in the photo on the right side of the slide below is captured as Feature. This is a picture of gravel, and those pointed tips of stones become as Feature instead of those stone surfaces. 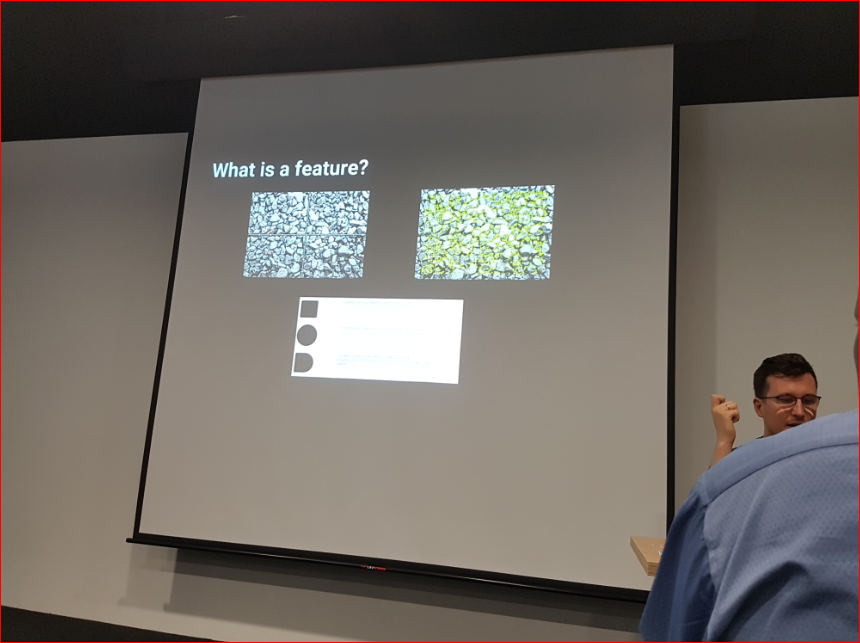 And, in order to stably recognize Marker Images, it is necessary to have many features, and the features are represented by the stars of Rating as described above.

The left side of the image below is the image of a roundish object and it has just one star as the lowest rating. On the other hand, on the right side of the image with sharp corners, a lot of features are detected in the Contrast image, and the Rating is the top 5 stars.
It is said that 4 or 5 stars are required to correctly recognize the image. 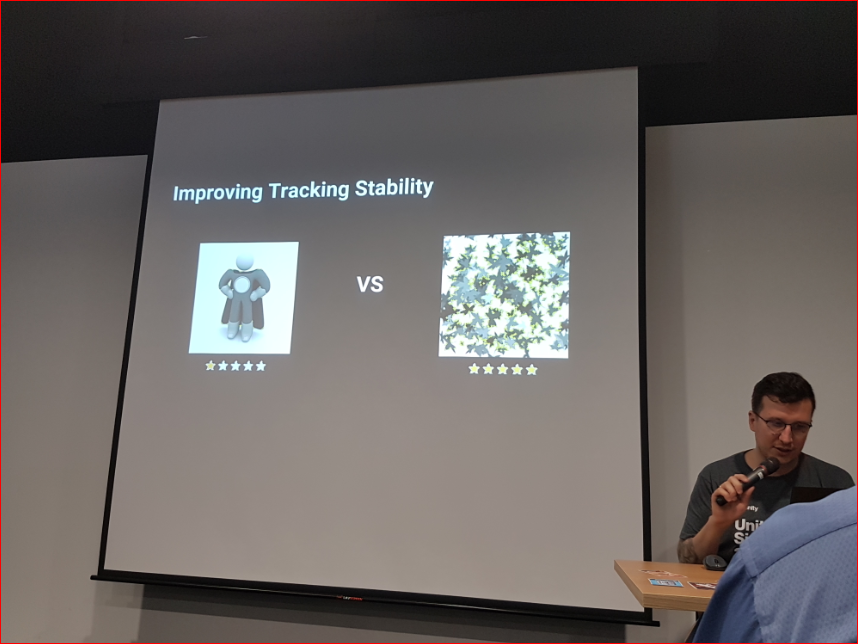 More features appear in images with more contrast. It’s a bit hard to see, but the top image in the image below is three stars with a weak Contrast, and the bottom image has a stronger contrast with five stars.

The point is that you need the strength of Contrast to convert to black and white. Contrast is very important, not the color of the color picture. 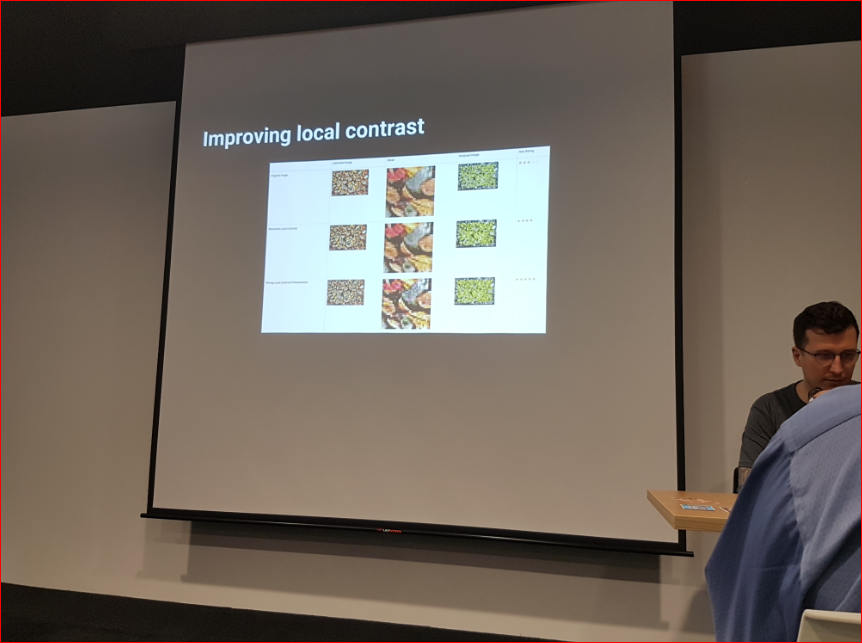 Next, about the distribution of Feature. It is better that the features are uniformly distributed over the marker to be recognized.

The image below shows women having complex shapes. There are many features in that complex form, but there are not so many features on the female face. This is an example of a bad distribution of features. 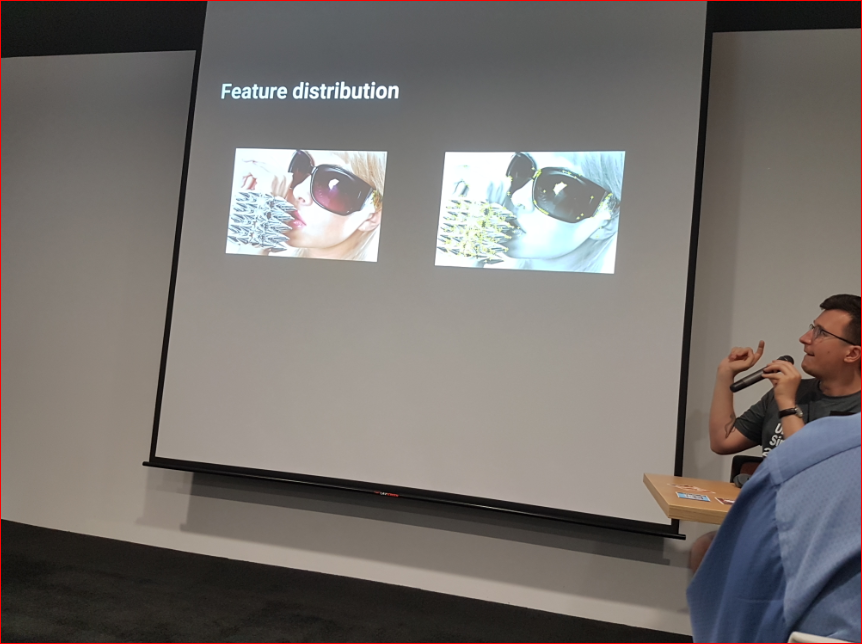 The balloon image below is an example that because there is too less contrast, so no feature.

The image on the left is a color image, and human eyes can clearly see the boundaries of those balloons. Make it black and white, that is the right side. In this case, there are many areas where the contrast is weak, and eventually those features appear only at the intersection of the balloons. 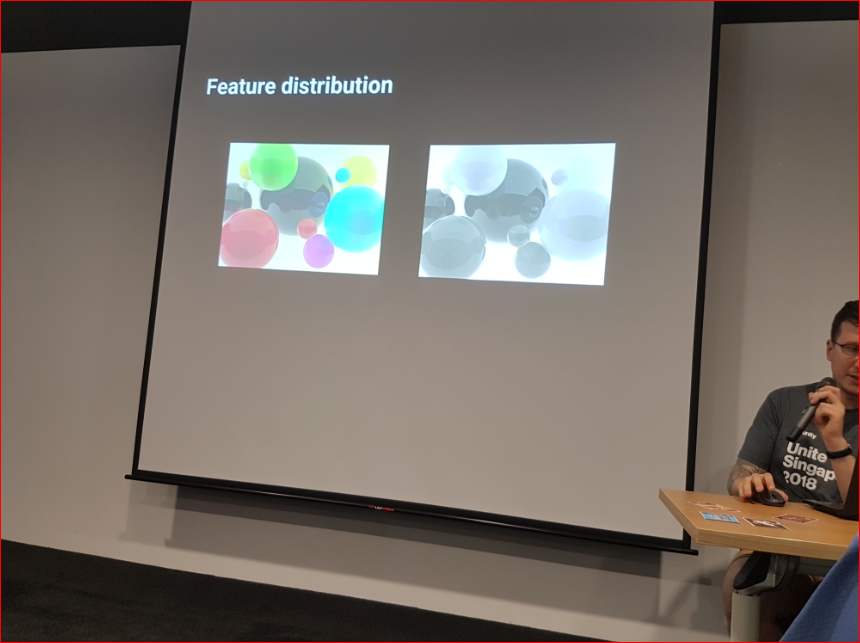 Next, about Repetitive Pattern.

The same thing is written on the official page of Google’s ARCore, and Vuforia is also not good for continuous images. For example, a building with windows of the same shape, and a building with the same columns. It may be apt to be an artificial structure.

In the image below, the left image has the same pattern continuously. This has 0 star. On the other hand, the image on the right looks the same at first glance, but if you look closely, you can notice it has a lot of different patterns. This seems to be five stars. 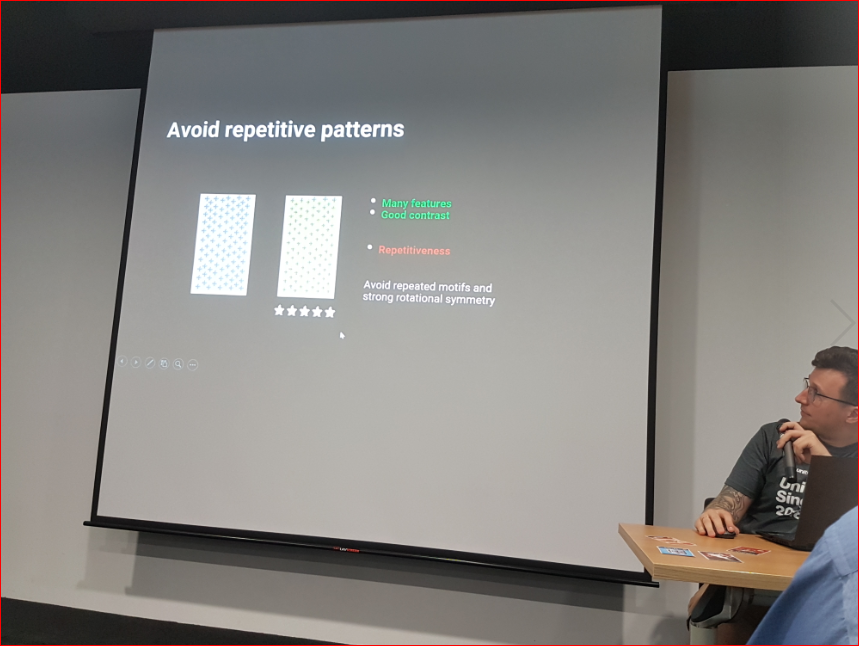 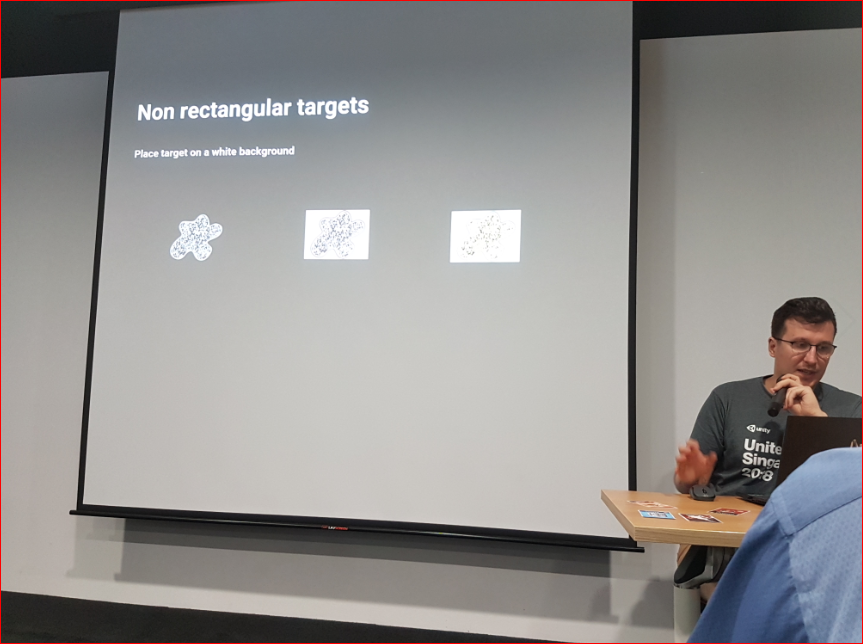 It’s also explained the physical characteristics of the image file. 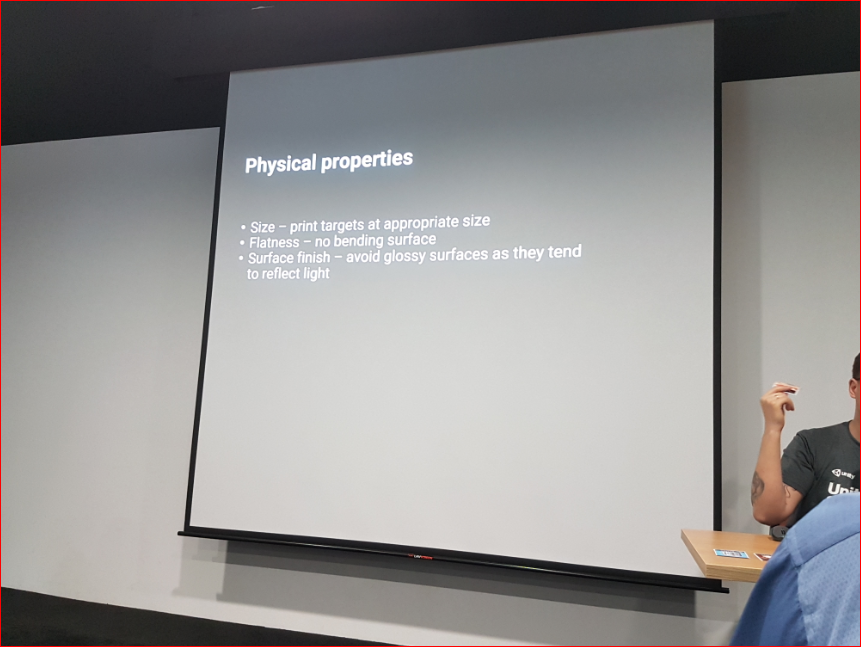 【Additional: Pixel Building at the venue】

The facility ‘Pixel Building‘ is located in One North, where many tech start-up companies are gathering. The facility was established by the Singapore government’s IMDA to support the development of the Infocomm-Media field.

There are many small start-ups and there are also common spaces for events. Many High-Tech events are held there.

A photo below taken from outside of Pixel Building, and the class room on the day. 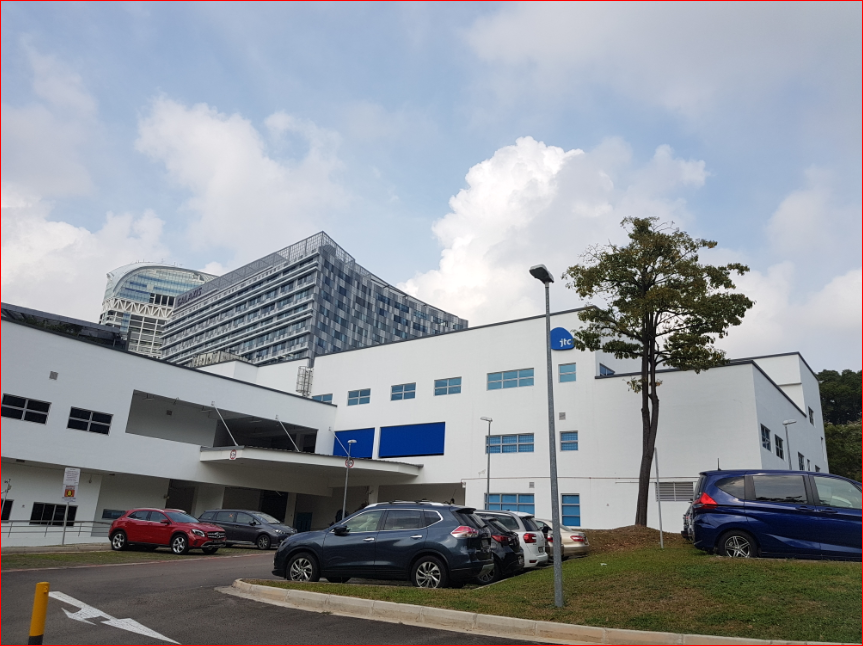 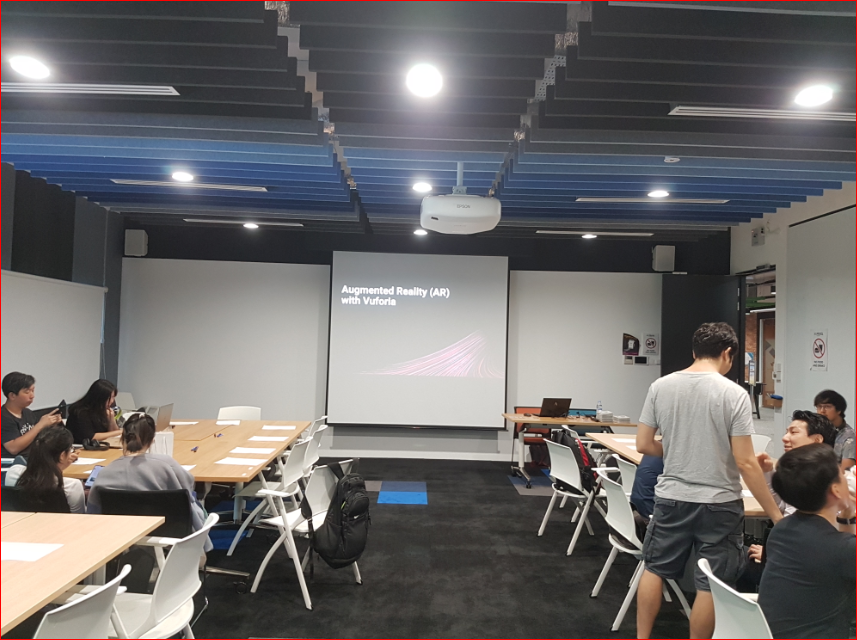