This image gave me a very big shock…
Because I’m individually creating and releasing game apps by Windows PC, for not only Android app, but also iOS app.

[Link: How to release iOS app by Windows PC]

In the blog posting, I introduced the way which is kept necessary costs as low as possible. However, looks like the situation was changed a little.

The important point of the way is how to build the apps for iOS. For the building, I was using “Unity Cloud Build”.
It’s free before, but the Unity policy was changed.

Currently when I connect to Unity Cloud Build, following message are appeared, then it’s impossible to click Build Button.

I investigated and found that “Unity Cloud Build” became a part of “Unity Teams”, it’s the image of the top.

[The detail of “Unity Teams”]

You can easily understand the detail by following image. 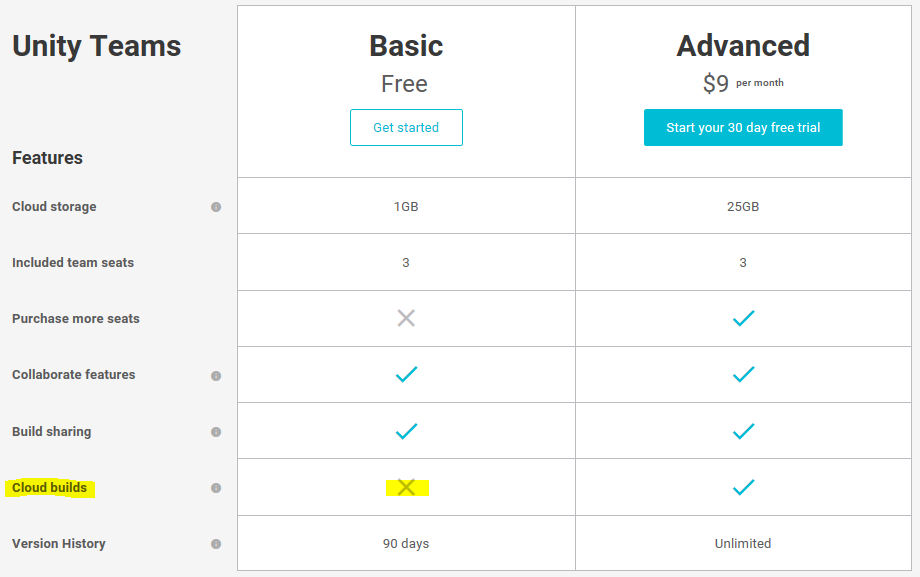 Please focus on the yellow line. “Cloud Build” was removed from Basic Free, and need to pay 9 USD every month as Advanced if we want to use it.

9USD… it’s not so expensive, but I feel it’s very expensive…

Because the reason I was using “Unity Cloud” is only to build app for iOS to release Apple store. I’m windows user, so mainly I create game app for Android, and then just rebuild it for iOS. (You know basically we need Mac PC to build for iOS.) So I don’t’ use Unity Cloud so many, for some months totally no use. However need to pay 10 dollar monthly…

What should I do? Should I buy Mac PC or use “Unity Teams”?